At the Democratic Convention 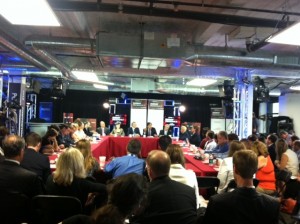 The POLITICO Roundtable on Energy & the Presidency

Leaving Vermont yesterday, I never made it to Charlotte for the Democratic National Convention.

After a five-hour delay in Washington, I gave up and spent the night. The delay allowed me to briefly watch the Convention and hear Julian Castro, the mayor of San Antonio provide a hopeful and visionary possibility of what America could one day become. He repeated over and over the mantra of, “invest today so we can prosper tomorrow.” Invest today in training and education, infrastructure, new jobs and technology. Without continued investment in what made our Nation great in the past, we will never be great again.

When I arrived in Charlotte, I headed over to the American Sustainable Business Council Policy Forum on Building a Sustainable Economy. I’ll speak there about community sustainability, focusing on the Bronx Community Development Initiative, a project to launch cooperatively owned, sustainable businesses that service the Bronx’s Anchor Institutions.

The conversation focused on how financial capital can be deployed to create new jobs, stabilize communities, catalyze new productive technology and services and increase overall societal well-being. We heard compelling examples of how to use capital to have a broader societal impact, as well as how tax policies can encourage more of what the economy needs.

Over the past three decades we’ve seen an unparalleled concentration of wealth through a dramatic reduction of capital gains taxes and taxes paid by the wealthiest Americans. As Warren Buffett famously said, it’s wrong that I pay less tax than my secretary.

American Sustainable Business Council is here in Charlotte to discuss with delegates to the convention which legislative initiatives will most effectively stimulate a just and sustainable economy.

We also heard from Congressman James Clyburn, Democrat from South Carolina, the number 3 leader in the House who spoke on “The Importance of Hearing from Sustainable Businesses.” Clyburn’s life was shaped by the civil rights movement and his father’s career as a minister. From a policy perspective he began with his support for the nuclear energy industry – as part of a “green” energy economy. Yes, he also supports wind, sugarcane ethanol, and switch grass but, contrary to my own beliefs, the Congressman believes we need nuclear in the energy mix.

Let me summarize the conversation. Go alternative energy and energy efficiency – go. And, oh, by the way, Romney only cares about oil and gas.

Of interest! Today we’re at an 18-year high in domestic oil production and an 18-year low in CO2 emissions. Will Obama in the next 4 years be able to regulate greenhouse gases? Unclear, perhaps at best, an industry-by-industry approach. The new fuel efficiency standards for autos will do more to mitigate the cost consumers pay for gasoline. Fracking needs strict regulation.

The city has been overtaken by the convention. I’m ready to come home to Vermont.