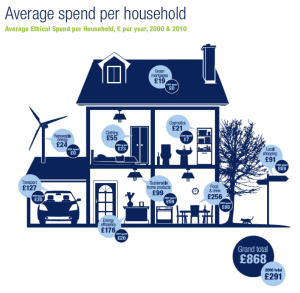 The Ethical Consumerism Report 2010 was produced by The Co-operative Group, which has tracked shopping trends in the United Kingdom for more than a decade, found that, “despite the economic downturn, sales of ethical goods and services have remained resilient, going up almost 9% last year from £43bn to £46.8bn. Acting as a barometer of green spending since 1999 when annual ethical sales were just £13.5bn.”

Investments in ethical savings and investments grew 9.3% from £19.3bn to £21.1bn year on year. This included the emergence of peer-to-peer lending, whereby individuals can lend direct to micro-entrepreneurs in the developing world.

Not all ethical expenditure increased. Sales of organic food, unlike trends in the US where growth is still robust, were down 10% year on year at £1.53bn, which means it has decreased 23% since its peak of £1.99bn in 2008.