How Multi-National Business Holds the US Economy Hostage

In Jeffrey Sachs’ new book, The Price of Civilization, he states in no uncertain terms that the US economy is held hostage to a narrow group of corporate interests. ”Corporate wealth translates into political power through campaign financing, corporate lobbying and the revolving door of jobs between government and industry; and political power translates into further wealth through tax cuts, deregulation and sweetheart contracts between government and industry. Wealth begets power, and power begets wealth,” he says.

Sachs identifies four sectors of US business that exemplify this impact – those who have effectively taken over of political power in America. Ross Gittins, The Sydney Morning Herald’s Economics Editor, summarizes these four business sectors in his excellent review of the book. 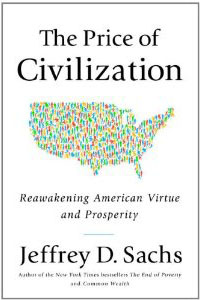 First is the military-industrial complex. “As [President] Eisenhower famously warned in his farewell address in January 1961, the linkage of the military and private industry created a political power so pervasive that America has been condemned to militarisation, useless wars and fiscal waste on a scale of many tens of trillions of dollars since then,” Sachs says.

Second is the Wall Street-Washington complex, which has steered the financial system towards control by a few politically powerful Wall Street firms, notably Goldman Sachs, JPMorgan Chase, Citigroup, Morgan Stanley and a handful of other financial firms. These days, almost every US Treasury secretary – Republican or Democrat – comes from Wall Street and goes back there when his or her term ends.

Third is the Big Oil-transport-military complex, which has put the US on the trajectory of heavy oil-imports dependence and a deepening military trap in the Middle East, Sachs says. ”Since the days of John D. Rockefeller and the Standard Oil Trust a century ago, Big Oil has loomed large in American politics and foreign policy. Big Oil teamed up with the automobile industry to steer America away from mass transit and towards gas-guzzling vehicles driving on a nationally financed highway system.”

Sadly, and catastrophically for the impending impact of global climate change, Big Oil has consistently and successfully fought the intrusion of competition from non-oil energy sources, including nuclear, wind and solar power.

Fourth is the healthcare industry, America’s largest industry, absorbing no less than 17 per cent of US gross domestic product.

”The key to understanding this sector is to note that the government partners with industry to reimburse costs with little systematic oversight and control,” Sachs says. ”Pharmaceutical firms set sky-high prices protected by patent rights; Medicare [for the aged] and Medicaid [for the poor] and private insurers reimburse doctors and hospitals on a cost-plus basis; and the American Medical Association restricts the supply of new doctors through the control of placements at medical schools.”

Sachs summarizes what this tightly knit group of industries have accomplished for themselves. ”Consider the pulse of the corporate sector as opposed to the pulse of the employees working in it: corporate profits in 2010 were at an all-time high, chief executive salaries in 2010 rebounded strongly from the financial crisis, Wall Street compensation in 2010 was at an all-time high, several Wall Street firms paid civil penalties for financial abuses, but no senior banker faced any criminal charges, and there were no adverse regulatory measures that would lead to a loss of profits in finance, health care, military supplies and energy.”

The 30-year achievement of the corporatocracy has been the creation of America’s rich and super-rich classes, he says. And we can now see their tools of trade.

No organization is better equipped and committed to fight for businesses committed to a just and equitable future, one that restrains the influence of the corporatocracy than the American Sustainable Business Council. They need your help and support. Learn more at: http://asbcouncil.org/

Jeffrey Hollender is the co-founder and co-board chair of the American Sustainable Business Council.