Let’s start to recognize this: we are all interconnected.

We’ve all seen the news: droughts in the south, fires ravaging our forests in the west, hurricanes on the east coast. North America has been affected by significantly more weather-related extreme events in recent decades, especially in the year 2012, than may other parts of the globe. A  publication by Munich Re, the worlds foremost reinsurance agency, titled “Severe weather in North America” analyzes all kinds of weather perils and their trends. The report and shows that the North American continent has experienced the largest increases in weather-related events that caused significant insurance losses. 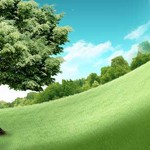 Hurricane Katrina in 2005 was the costliest event ever recorded in the US with US$ 62.2bn insured losses and overall losses of US$ 125bn, Katrina was also the deadliest single storm event, claiming 1,322 lives.

More recently, in 2011, NOAA calculated 14 extreme weather and climate events that reached the billion-dollar threshold in losses.  In 2012, while there were less extreme weather events (11), economic losses grew by 66%, from $60 billion in 2011 to $100 billion from just Sandy alone.

Those are some staggering numbers, yet most of us believe we have escaped the devastation. We see the pictures on TV. There is something mesmerizing about these gigantic storms. Weather has become a “hot” TV topic breeding numerous shows about those who brave extreme weather. The impact that these numbers have had on the lives of “other” people is almost impossible to understand. It’s not about days without power, but entire lives, family history, social networks, careers and so much more gone in a matter of hours.

We hear about weather disasters all around the world that are almost certainly magnified if not caused by global climate change, and we feel sadness and distress, but most of us are still not convinced that what happens to others will, one day happens to us. When we take, we take from ourselves. We all breathe in the pollution that is swept up in the air. When the disaster hits, we all suffer because we all ultimately pay for the restoration. We are all interconnected on this one planet.

When big business doesn’t pull its weight by mitigating it’s CO2 emissions, we are all pulled down.

Munich Re has repeatedly warned insurance companies to account for impending natural disasters, the same must be done by other corporate entities. Shouldn’t a business account for the negative externalaties they are contributing to? Every day, corporations across the US are polluting the air, dumping waste and toxins into waterways and using raw materials at a rate that the planet cannot replace. This natural capital depletion – water, minerals, clean air, a healthy planet – is taken for granted by most companies, and why not, they are usually not made to pay for it. By taking what we all should share, we all end up poor.

As author Jeremy Rifkin notes, to build a more empathetic society, we must bring out our inherent empathetic sociability – the ability to see that we are all interconnected on this one planet. We all need to realize that when we use a resource and don’t replace it, or don’t account for it, we are taking from not just somebody else, but from all of humanity. Building an empathetic society would recognize that climate-related weather events happen to us all no matter where we happen to be located at the exact moment the disaster hits. We, and big business, need to do more to recognize and proactively mitigate these impending disasters.

You may be asking, how can a faceless multi-national corporation display signs of empathy for their fellow humans. Good question, and it starts with deeply engraining a sense of society into the work and family culture as well as the educational system. The Nordic Countries of Finland, Denmark, Sweden and Norway have consistently ranked the highest in the field of corporate citizenship mainly due to the integration of social and environments concerns that are at the core of the Nordic culture into the company culture. The empathetic values of gender equality, equality and fair usage of natural resources are engrained into the Nordic corporation’s business model.

The problem isn’t just the corporation – it’s the society that we live in that has allowed most corporations to take over the destiny of our planet and to disregard the humanness of doing business. The first step in reversing this trend starts with ourselves, recognizing that we are all interconnected and we all suffer when there is suffering. We all pay when one doesn’t pay. The second step is more practical, and that entails and overhaul of the traditional business model: putting an end to the unaccounted and unsustainable usage of natural resources by which corporations are undermining the health of our planet.