Guest post by Taliesin Nyala, a co-owner of the Toolbox for Education and Social Action (TESA), a worker-owned cooperative based in Massachusetts created to democratize education and the economy while furthering the cooperative movement. TESA designs curriculum and resources for learning, such as Co-opoly: The Game of Cooperatives.

Wall Street is booming while nearly 22 million Americans are unemployed or underemployed. Corporations and the wealthy are thriving while almost 50 million of their fellow Americans are living in poverty—that is one in every six people. This means that we all know, or are ourselves, one of those struggling to get by. Meanwhile, our elected officials, most of whom receive money from corporations and the wealthy, bumble along, proposing one poor solution after another and barely getting anything accomplished. 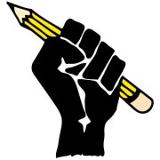 We can’t wait for top-down solutions—we need to make change ourselves. Worker-owned cooperatives have a huge potential to reshape our economy at the local, national, and international level. There are roughly 30,000 co-ops across several industries in the U.S., of which about 300 are owned by workers. In these businesses, every worker has a say in how the business is run—one member, one share, one vote. These democratic workplaces keep money and resources within their communities and tend to be more resilient in bad times because the workers have incentives to pull together instead of going under.

The potential of worker co-ops in the U.S. hasn’t been fully actualized yet: In other parts of the world cooperatives have raised the standard of living and lifted regions out of economic hardship. For example, thanks to cooperatives, Italy’s Emilia Romagna boasts some of the lowest unemployment rates and highest standards of living in Europe, despite the ongoing worldwide recession. They achieved this through hard work, systematic cooperation, and making important legal changes—all of which we could apply here in the U.S.

Because the concept of cooperatively owned entities is not commonplace in the States, there are several legal and educational hurdles people must confront when they start their own co-op. We need to push for changes in our laws to support cooperative businesses. More states should have statutes that favor local, worker-owned enterprises as a way to bolster their local economies. For example, laws that allow workers to have the right of first refusal could help keep businesses from being sold and moved overseas.

Right now, only Massachusetts, Connecticut, Maine, Vermont, and New York have incorporation statutes for worker co-ops. People can work around that by structuring their bylaws to be more in line with cooperative practices, yet legal and tax issues are still more difficult to manage. The most recommended form of co-op is the “unincorporated co-op” because, in addition to being financed by member share purchases, member loans, bank loans, and retained earnings, it can also be financed by the sale of shares to non-patrons without a ceiling of 8-10% of return on those shares. Only Wyoming, Minnesota, Wisconsin, Iowa, Tennessee, Utah, and Nebraska have the unincorporated co-op in their statutes. More states should have this as part of their statute to make it easier for co-ops to be initially and continuously financed.

In addition to legal changes, we need robust educational resources to guide people through the process of starting and running a democratic workplace. This is where my worker co-op, the Toolbox for Education and Social Action (TESA), comes in. We have developed an expertise in building educational resources to help people start and manage their own worker co-ops. We believe democratic education is the best way to teach people about alternative economics, social change, and movement building. What sets our work apart is that all of our resources—be they workshops, curriculum, or games—embody the principles we are teaching at their very core.

We work closely with leaders in the field to develop these resources. Most people who are actively working in a co-op don’t have the time to devote to making educational products; when their knowledge goes untapped, it is a loss to the cooperative community. So we collaborate with these cooperators, combining their knowledge with our tools to design educational resources that can guide best practices in other cooperative businesses.

Building a cooperative economy will not be fast, but we can set ourselves up for success if we continue actively pushing for legal changes and educating people about how to create their own worker-owned enterprises. We should not remain beholden to a system that privileges the few while letting millions of others hold jobs that barely allow them to survive. Instead, we need to restructure our economy so that it favors workers over corporations, empowering and lifting employees out of poverty and setting families and their communities on the path toward thriving.