All the Single Ladies, a new book by award-winning journalist Rebecca Traister, explores the history of social and economic change in America…through the lens of the single American woman. The bottom line is this: historically, when women were given options beyond early heterosexual marriage, the result was noticeable social change – suffrage, abolition, and secondary education to name a few. Now, in a time when fewer and fewer young American women are getting married (today, only around 20 percent of Americans ages 18–29 are wed, compared to nearly 60 percent in 1960), Traister claims that we’re seeing traditional economic and political norms being challenged. 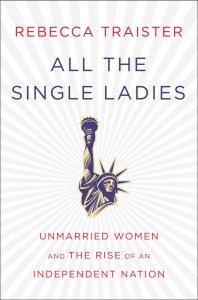 For the first time in American history, single women outnumber married women. Women aren’t getting married not because they want to prove a point, but because it’s finally sort of ok for a woman to believe that marriage does not equal complete and total success. Marriage is no longer an end goal. Rather, the idea that a woman without a man can be a professional, sexual, and responsible individual is pretty widely accepted these days. As simple an idea as it may be, it’s sadly the first time in US history that women are so trusted and respected.

Traister points out that as women have taken on and internalized this independence they (and their allies) demand alternatives to old-fashioned policies that have privileged married, working & wealthy white men above everyone else. It’s true: women also need a fair wage equal to male counterparts, family leave, and affordable health care, as well as accessible reproductive health care and universal pre-Kindergarten.

What’s interesting is that Traister seems to imply that this movement lead by young, single women is separate from the mainstream movement for equality in the name of feminism. Rather, it is a movement of women fighting for survival (which is actually an inherently feminist cause, by the way). Equal pay is important, but what is also important is creating options and opportunity for women specifically so they can be as successful as our society has allowed (white) men to be.

Unfortunately these options and opportunities are still lacking, but that means that young women (and their allies) are becoming more politically involved, and looking for liberal leaders that stand behind these causes. That’s why Traister claims young, single women are a force to be reckoned with in the coming election…big social change is around the corner.