The Voice of Small Business Is Ringing True 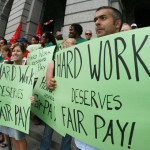 There is still one thing both sides of the aisle agree on: Small businesses are great for the economy. After all, there are 23 million small businesses in the U.S., accounting for more than half of all American jobs and sales, according to the Small Business Administration. Without them, the economy would be more vulnerable and far less diverse. And both political parties like to trumpet how much they support these job creators.

So how can we make sure we’re doing the right things to support these companies? The answer’s simple: Ask them.

ASBC, which I helped found in 2009, is dedicated to supporting a more sustainable economy, and this poll shows that small businesses support the same objective. Why? Because they appreciate that unless we build a more vibrant, equitable and environmentally sound economy, they will be at tremendous risk.

Take climate change, for example. Nearly one in five small business owners say extreme weather associated with climate change has already affected their business and another thirty-four percent say they expect it to later. And eighty-seven percent listed at least another negative consequence of climate change they’re concerned about.

When it comes to regulating carbon emissions from power plants, half supported the idea, even when both sides of the argument were presented together. Only twenty-eigh percent were opposed. That’s because small businesses recognize that protecting our environment and growing the economy are ideas that are not at odds with each other.

The same is true with clean water. Seventy-one percent said clean water protections are necessary for economic growth, compared to only six percent who said they were a burden – and 80 percent, including majorities of Democrats, Republicans and Independents, supported an EPA plan to protect upstream waters.

Of course, we’re not just talking about sustainability in the “green” sense, although there’s clearly a lot of support for that. We’re also talking about an economy that can grow in a way that benefits job creators and workers alike – because when everyone does well, the economy grows.

That’s why in polling small business owners about minimum wage there is broad small business support – 61 percent – for raising the minimum wage to $10.10 an hour. It’s why fifty-eight percent agreed with the argument that raising the wage will increase consumer purchasing power, and why fifty-three percent said it would improve productivity and cut employee turnover.

These findings are not necessarily what you might expect to hear small businesses to say. Additionally, a plurality (43%) of business owners surveyed voluntarily identified themselves as either Republican or Republican-leaning Independents. So this means that partisan politics is not driving small business but rather what is good for their business. After all, the prevailing narrative in the media, perpetuated by institutional business organizations, focuses on how businesses perceive action on climate change or the minimum wage or environmental protections are job killers. As this polling shows, that’s not true.

The reason small businesses support these policy ideas is because they understand the bottom line. After all, if energy or health costs go up because of climate change, that’s money a business will not have available to spend on hiring or expanding. If clean water isn’t available, businesses will have no products to sell. And if the minimum wage stays low, that keeps consumer spending – which drives about seventy percent of U.S. economic growth – low.

The fact that small business supports measures to create a sustainable economy shouldn’t be surprising. That’s the only way the economy is going to continue to grow.

What we need to do now is make sure this argument gets heard loud and clear, instead of the one that says businesses don’t want action. This polling is a great opportunity to make sure it does, precisely because it’s businesses saying it.